Tom Lehman, premier PGA TOUR professional, is delighted about his first signature design in his native Midwest. “I am very excited about what we have built here at Troy Burne,” remarks Tom. “I am sure it will be one of the best courses in the area, private or public.”

Born in Austin, Minnesota, Lehman attended the University of Minnesota where he was a collegiate All-American in 1979-1981. After a few quiet years on the PGA TOUR in the early 80’s, Tom took his game global and competed in Asia, South Africa, and elsewhere for the rest of the decade. 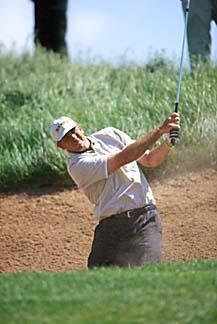 Returning home and using his three 1991 victories on the Hogan Tour (now the Buy.com Tour) to regain exempt status on the PGA TOUR, Lehman quickly established himself with nine top-10 finishes, leading to the 24th position on the 1992 money list.

Tom has since become one of the most popular and consistent players on tour. He has five PGA TOUR victories to his credit, including the 1996 British Open Championship, and the 2000 Phoenix Open, which led to a 12th place finish on the money list last season with over $2 million in earnings. Always near the top of the leaderboard at the majors, Tom has built a reputation for performing his best on the biggest stages while competing with the most talented players in the world. This has earned him spots on three Ryder Cup teams as well as three President’s Cup teams. Perhaps Tom’s crowning professional achievement came when the PGA of America named him to captain the American team at the 2006 Ryder Cup in Ireland. More recently, Tom became the first Champions Tour player to win back to back Schwab Cup titles.

Tom’s course design career has also flourished. Besides Troy Burne, Lehman has contributed to designs in Minnesota, Florida, Arizona, and Colorado. The course architects he has collaborated with have offered high praise for Tom’s input and dedication to the projects. Tom formed a design partnership with John Fought, 1977 US Amateur Champion.

Now living in Scottsdale, Arizona, Lehman still takes his Midwest roots very seriously, returning home often to visit family and friends. Tom is inducted into the Minnesota Golf Hall of Fame.
Crediting his strong focus on family for his success on Tour and in life, Tom and his wife Melissa have four children: Rachael, Holly, Thomas Andrew and Sean. His interests include hunting, fishing and church activities.